Where is the house? 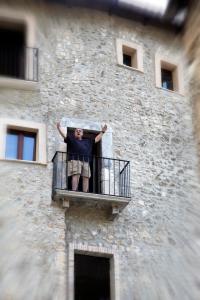 When Jorge arrived to join me in Italy, I was having trouble getting our city water connected. Franco, my wonderful neighbor who was always there to solve my problems, suggested that I go to city hall and inform them that we can tentatively connect to his water line until we solve the problem. I considered it a good idea to send my husband off to city hall. Maybe if he became more involved in life in Italy he might learn to like the art of living Italian style.

The meeting of two hours was not very helpful. He had to argue with the city planners since they said Franco did not have a house near us. My husband insisted being that he had just had coffee there that morning, A wink from one of the employees made him end the discussion. He returned to Franco for an explanation. Franco answered,“Oh, I forgot, I never did get permits when I build it. You can’t do that anymore, so sorry.” Jorge looked at me and made no comment. He then went outside and looked up at the sky with outstretched arms and cried out, “What am I doing here? Why Me God?”