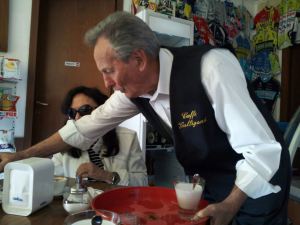 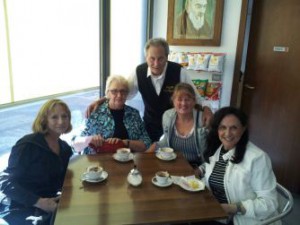 Umberto, named and honored as the King of Cappuccino started his training at age 14 and at age 84 continues to make his special coffees at his bar as he has done for the last 70 years, He is another one of my favorite artisans. Greeting the crowds that come daily for that special espresso or cappuccino will never allow him to retire. He exudes the passion he has for his work along with making people happy. Putting designs of hearts with powered cocoa for special ladies and for men, a certain male body part brings laughter every time. Only in Italy. He walks the room, adding extra warm or cold milk to those that might need an extra shot without asking, serving with a big smile. This week my friends and I were were about to leave when Umberto asked us to be seated again for he had prepared for us a special frappe, complements of the house, which was divine.

When opening our Bistro in 1976, we were one of the first in Orange County, California, to have an espresso and cappuccino machine before they came into vogue. Although restaurants and coffee establishments may have added the machine still many fail to understand the importance of making an excellent cup of espresso. Establishments often may put their last hired and or least trained staff to make the coffee failing to take into consideration the basic principle that one must invest in and the practice needed to make that descent cup.

In Italy it is never considered just an afterthought and simple chore. For an Italian the most important person in an Italian food location often may be the coffee maker, a fanatic in taking his work seriously who may have spent hours passionately practicing to make the perfect coffee. The coffee maker’s role in most Italian establishments, at least until recently, often determ 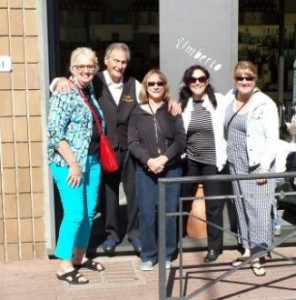 ines the success of a location.

In our restaurant we had an imported Italian coffee machine, an Italian trained waiter to make the coffee, Italian coffee imported from Italy, and still was told by my family members and Italian waiters that it was not as good as in Italy. For most Americans it was great. This led me to study what it could be that made it different than coffee in Italy. Could it be psychological? Could it be our setting in a shopping center looking out at a parking lot compared to a view of an ancient medieval hamlet, the magnificent piazza of San Marcos in Venice, or a sunset looking out at Mt Vesuvius? Our waiters were professionals having learned their skills in Italy. Our imported coffee and coffee machine were the finest made in Italy.

Months passed without a solution until a new Italian waiter joined us and ascertained the cause of our dilemma. It had to be the water the only factor we di 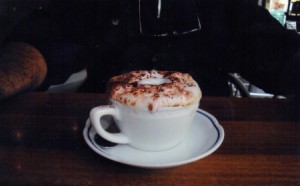 d not consider. Water is very important element in making a flavorful and balanced cup of espresso. It was the only variable that differed from Italy. Coincidentally, it was shortly after that when a notice was sent out to the residence of Newport Beach, California, to inform them that if anyone were to detect an unfamiliar taste in the water they should be reassured it was not dangerous to consume but suggested it should not be fed to domestic animals and especially detrimental if put into fish tanks. This may help answer that question always asked why does it taste better in Italy? Could it be the demands made by those having experienced quality in a food culture nation?

Watching Umberto, Re of Cappuccino make a cappuccino will help one understand why this is considered a complete Italian’ breakfast to hold one over until their main meal for lunch. Italians frown on those that can end a great meal with a cup of steamed milk topping espresso. That is a definite “ no, no” against their dietary code.