After a year of blogging fun memories in Villa Lucia’s kitchen in Tuscany, I decided that in 2015 I will share bi-monthly some of my personal experiences in the bathrooms of Italy. This will be followed by bringing our readers into the bedrooms of Villa Lucia to share experiences of our guests without using names. 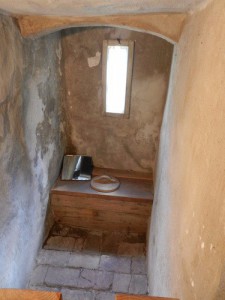 In the late 40’s I visited my grandparents in Italy, who as great land owners were fortunate to be one of the few that had a bathroom indoors out of their country home. As a child I found it to be strange looking, but having little choice, had to accept the wooden seat with an arm rest whose function may have been to prevent one from falling into the hole (that would send the waste with pumped-in water out into the countryside somewhere.)

It was similar to the picture of the old fashion wooden throne seat. Missing from this photo is the pile of outdated daily newspapers on the ledge near the wooden throne, that I later learned were to be used to clean oneself. Paper was still a rare commodity in the 40’s in Italy. Years later while travel 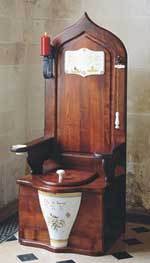 ing on a scholarship program to Italy in the 60’s my mother reassured me bathrooms would now be more available and modern.

But then why did she fill every little corner of my suitcase with American toilet tissue?

I ascertained the answer when traveling when  introduced  to various types of tissues, none of which resembled that which I was accustomed to in the States. There was the  slippery wax paper type, the thick hard to fold cardboard- like  paper and  the flimsy thin see through tissue requiring  many folds so as not to create a finger-breakthrough.  But nothing could compare with my memory of  the abrasive, rough sand paper type.

God forbid if not used gently for there would be no remedy for the resulting painful adult diaper rash.

Moving to Italy in the 80’s, most public buildings were required to have bathroom facilities. The problem now was to locate them, which often led one down steep staircases to restaurant basements, not suitable for the handicapped, and often not well lit. After succeeding in the scavenger hunt to relieve oneself, there would be the problem of finding the light switch.

Would it be on the rig 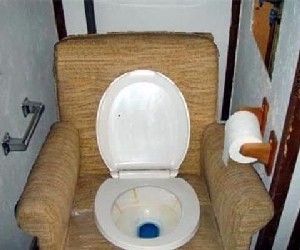 For those more fortunate, electricity being so expensive in Europe, one may find that the light is operated by an electric eye. If you wait and are able to hold your bladder for a few seconds the light will eventually come on. Unfortunately, it may also go off before one finishes their business but a few swings with one’s hands will signal that your work is not done, and the lights will go on again.The off-and-on neon glare is a not-so-polite suggestion not to linger, and to save electricity.

On the other hand, American bathrooms are made so comfortable that one is encouraged to linger, such is the case with this American red-neck pot.

It was never really a problem for me, until moving to Tuscany in the 90’s  and having to provide a urine sample for a doctor. Seei 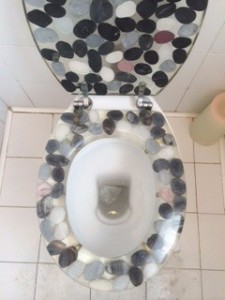 ng the narrow one-inch wide test tube that I was given to fill, I was wondering if I was mistaken to be a man or if it was some kind of joke. Nevertheless, not wanting to be difficult, I proceeded to the rest room with the narrow vial.

Needless to say, it was a very difficult ordeal.

The lights went off during my attempt, making it not only impossible to see, but also a messy situation in the unfamiliar dark room. Waving my arms and begging for light only spilled the vial which I had successfully half-way filled, and surely would be unable to refill. The glaring neon lights shone on me as if caught in a crime, revealing the mess I had created in the dark. I felt as if Candid Camera had found me in the bathroom, frightening  me to even use the facilities. While searching the stall for that hidden camera I noticed a small plastic cup that was placed on the ledge, which would have been much easier in terms of “aim” than the 1 inch vial.

Traveling with my granddaughter Laila in 2014 I realized that Italy has come a long way from my days in the 40’s. We were surprised  to be able to experience in Venice toilets made of 100% murano glass!