When traveling to Italy to work on our abandoned farmhouse in the 80’s, my neighbor Nina, upon my arrival and our customary cup of coffee together, would always ask:

“So you’re here again, to add another bathroom. What do you Americans do in there?”

My objective in the first 12  journeys across the sea was accomplished, having added 12 more bathrooms to the house that originally had one. I believe today, for most Americans it has become one’s private sanctuary. Managing the B&B  I have found that guests will linger there indefinitely, missing buses and at times even meals. It has become a reading room, a spa, a place to contemplate and be alone; often the only place to enjoy solitude.

Out at a dear friend’s home for dinner one evening, I became concerned when another guest seemed to vanish into the restroom between the antipasti and the main course. As the hosts waited for 20 minutes to serve the main course, I began to wonder if our guest had actually ‘fallen in.’ Finally, as the steam ceased to dance invitingly above the meal and the courses grew cold, Sally returned, with a big smile on her face. Unaware of her tardiness and its effects upon the rest of the table, she whispered to me that she felt ‘so good.’ I whispered back that it must have been a ‘good one.’

This is something I don’t think many Europeans would do. In the 90’s, there was one bathroom item which always fascinated our international guests. 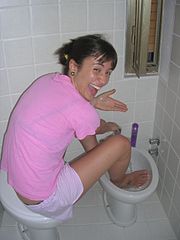 amazing how Italians cater to babies. They put those little tubs for infants in each room.” I overheard one B&B guest comment to another.

“Oh no,” said the other. “I believe it is to soak and wash your underwear.”  As they debated the issue, a third guest overheard them as he came down for coffee. Laughing at their comments, he informed them that they were both wrong.

“It’s a foot bath,” he said knowingly. I decided it was time to interve 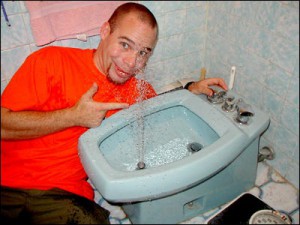 I explained to the misinformed gentlemen that it was to sit on, and to be used as a ‘cleaning devise.’ My revelation was met with much confusion, and many questions. “How do you sit on it?” They wanted to know. “Facing front or back?”

“Well, it depends what you want to clean.” This was my answer each time a guest questioned the use of the unique commode that is often placed to the site or directly in front of the toilet in most Italian bathrooms: the Bidet.

Europeans like my husband are introduced to the bidet after being potty trained as a child, making life without a bidet incomprehensible. Americans with an Anglo-Saxon heritage might have been introduced to the bidet for the first time by viewing the movie Crocodile Dundee, in which Paul Hogan accidentally squirts the ceiling, unaware of the bidet’s function as a cleaning devise for one’s private areas.

Apparently none of the questioning guests had seen the movie, or simply missed the significance of the popular Italian bidet. I must admit: although not raised using one, I have learned to appreciate this wonderful cleaning devise. I have been told that in the past foreign guests, unfamiliar with this commode, would mistake it for a toilet, creating a messy situation for chamber maids. Thank God they have been removed from most private rooms.

I for sure would never have been in the lodging business for 30 years, otherwise! 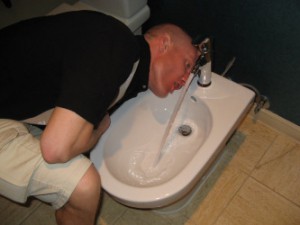