Serving dinner to some 20 guests during Jorge’s first week at the farm, I was amused more than concerned as he continued to follow me into the kitchen while serving to complain about his itchy nipples.

“What are you talking about? “ I questioned him, disturbed that he should be so concerned for a minor itch, knowing what woman go through at times, it was annoying. I was more concerned about our guests being served their food hot and on time, then a few itches on a man’s breast. Seeing his dreadful, worried face, he continued to repeat his predicament. I continued to serve our guests, avoiding him so as not to hear his constant plea for attention. Ignoring his dilemma at first, I did become a little conce 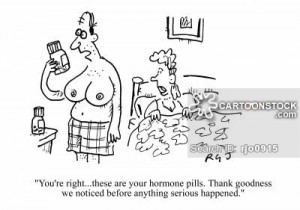 rned after the guests retired to their rooms. He explained that he knew without a doubt that he was experiencing a hormonal imbalance. This would require a possible return to Newport Beach, California for a lab study. Of course this study could be done in Italy, but I interpreted it as a reason for a trip back being that he was so unhappy in Italy.

The next morning as I was preparing breakfast, I heard that loud Desi Arnez latin scream for “Lucy!” coming from our room upstairs. As I ran up the stairs, concerned that he might have fallen in the shower, I found him stepping out of the bathroom with a stern look of disgust.

“Where is your estrogen patch?” he asked. Pulling up my shirt, I noticed a sticky 2 inch by 1 inch border of gluey residue, framing where a patch once was placed to the right of my navel. Before I could complete my sentence of not knowing where it went, he added:

“I know where it is, on the damn arch of my left foot!” Apparently two days before, the patch had slipped off my belly in the shower and somehow gotten attached to his foot. When commenting that I had no idea it worked so well, he answered that it worked damn well and added if he didn’t remove it soon he might continue to see some parts of his anatomy continue to grow and others continue to shrink.

As I quickly escaped downstairs, excusing myself to resume my breakfast duties, his voice carried throughout the house as he yelled out how much he hated this country. Now tell me, what does this have to do with Italy? When he joined the rest of the group for breakfast and told his story of having experienced 48 hours of fresh estrogen, they laughed continuously for what seemed like 30 minutes. He didn’t think it so amusing as he explained that his voice may adopt a slightly higher pitch in tone. He then looked up to the ceiling, with hands outstretch high and questioned what many have heard him ask, “Why Me God?”