Plastic Surgeon or Veterinary, What Difference Does It Make? 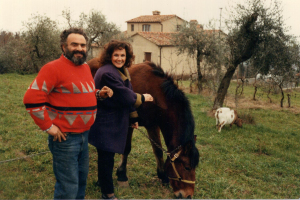 Franco and his Bimbo

Late one evening Franco came over shortly after Jorge had arrived in Tuscany asking for medical assistance with his bimbo. Bimbo in Italian refers to a young child. Franco kept pleading for assistance with “Dottore, Dottore mio Bimbo,” and being that I had spoken so highly of him, Jorge naturally went to his assistance. Four hours later, at 2 AM in the morning, I heard Jorge coming up the stairs to our bedroom, mumbling to himself.

“What happened?” I asked. There was no immediate response. I felt sorry for him, exhausted and needless to say, showing signs of discuss with his wife who wanted to live in Italy. When I questioned, “Well how was your first Italian house call?” He surprised me with his quiet and subdued voice as he explained how he just operated on his first horse. “Horse?” I asked.

“Yes, that is his bimbo ( kid),” he explained. I had to turn my head on my pillow so that he would not see my giggling face. As he lied down on his back, hands outstretched to the ceiling, he repeated that often heard phrase, “Why Me God?” 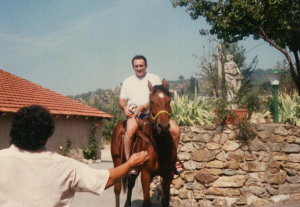